The Holy Month will soon be upon us, a time for spiritual awakenings and reflection. Ramadan brings the Islamic world together under an umbrella of self-restraint, contentedness, perseverance, and togetherness. Though, this year, the world may not be able to celebrate this time in all its spiritual communal glory, we’ve rounded up some wonderful traditions from across the globe that make Ramadan, well, Ramadan. We’ve also come up with some great ways to get together in the after-dark hours that don’t necessarily involve feasting. And, for those who are new to the region, there are Ramadan dos and don’ts to help you enjoy this special time.

This is undoubtedly the most joyous Ramadan tradition we’ve come across, full of smiling children, melodic songs, and sweets. Known as Gergaoon in Bahrain, there are other variants throughout the Gulf such as Karkee’aan in Saudi Arabia, Gargee’aan in Kuwait, and Hag Al Leylah in the UAE. Gergaoon is celebrated after the breaking of the fast on the 14th night of Ramadan. It’s a cheerful tradition, half way through the Holy Month, to reward Muslim children for fasting. Youngsters dress up in their traditional clothes, carry decorated bags and walk around their neighbourhoods singing the Gergaoon song, in hopes of some neighbourly treats.

Girls wear rich, colourful, embroidered jalabiyas and gold jewellery, while boys are adorned in traditional Bahraini thobes, jackets, and caps. Historically, children were given dates, rice and wheat, but these days the gifts are more likely to be sweets and nuts. “I remember wearing my traditional jalabiya and wanting to always top my look from last year, and sharing candy with my cousins. It’s definitely one of my fondest memories growing up,” Says Noor Jassmi. Under normal circumstances, Gergaoon celebrations can be found at malls and festivals across the island – arrangements for this year have not yet been announced but there are usually henna applications, puppet shows, face-painting, and traditional stories and it’s once celebrations expats have also taken to heart

Ramadan is all about starry nights and the crescent moon, and Egypt takes the concept of lighting up the night sky a step further. The country’s people gather together to welcome the Holy Month with colourful fanous – intricate lanterns that symbolise unity and joy – decorating the streets. There is much ancient folklore about the origins of the lanterns, but a popular tale dates their use to a night during the Fatimid dynasty. It’s said locals gathered to greet the Caliphate Al-Muʿizz li-Dīn Allah as he arrived in Cairo on the first day of Ramadan. Military officials held candles, sheltered with wooden frames against the wind, to light the dark streets.

Over time these wooden creations have been elevated to become a chaotic array of colours, now displayed across the entire country, spreading light during the Holy Month. “I remember going to the markets with my mum just before Ramadan. The streets would be flooded with lanterns of all colours and sizes and this little trip became our yearly tradition before Ramadan. It’s a way for parents to get their kids excited about Ramadan, and when we were buying things to prepare for the month, buying a fanous was number one priority,” says Nadine Abulnasr, an Egyptian national. Despite having no direct link to religion, the fanous has become a universal symbol for Ramadan with its intricate designs, and dancing rays of colourful lights.

The last night of Ramadan is always cause for celebration and, since this is based on the lunar siting, it makes the actual day of Eid a mystery until the night before, creating excitement and enthusiasm around the Muslim world. Some might say, it brings more excitement than Eid-al-Fitr itself, as the streets of Pakistan, Bangladesh, and India come alive with festivity. As soon as the moon for Eid is sighted, the women of South Asia rush to the markets for Chaand Raat. Chaand means moon, and raat translates to night, so the name literally means the ‘night of the moon’. After the final Iftar of Ramadan is completed and the moon for the commencement of Eid is sighted, droves of women and girls flock to the local bazaars to celebrate this auspicious night.

Most shopkeepers remain open late into the night and the true fun lies within the old alleys and streets. Some of the most important shops are those selling bangles and henna. Bazaars are adorned with makeshift stalls dripping with bangles of all designs, sizes, and colours. Women gather around to try on various assortments for the next day and you can easily lose your voice amongst the laughter and bargaining that occurs. The henna stands also attract large queues of women and children alike. Intricate and elaborate designs are created on hands, feet and arms, instilling even more excitement. Mashaal Gohar, from Lahore, Pakistan, says this is her favourite time of year. “There is so much life and commotion on the streets that it just instils the spirit of the occasion within you. My family and I go every year to this little local alley, that only allows oneway traffic, and we stand on the edges waiting in line for henna.”

The thudding sounds of drumbeats can be heard loud and clear in Ramadan on the streets of Turkey. Since the days of the Ottoman Empire, those fasting during Ramadan have awoken to the sound of a drum beating early in the morning for Suhoor, and that tradition has been kept alive to this day. Despite technology gracing us with alarm clocks in our phones, more than 2,000 drummers still roam the streets of many areas in Turkey, rousing the community to take Suhoor before commencing their fast.

These drummers dress in traditional Ottoman attire, including a fez and vest adorned with traditional motifs, paying homage to their lineage and culture. They make their rounds with their traditional double-headed drums known as davul, beating in unison, and sometimes chanting a song or poem. “This drumming tradition was an integral part of our Ramadan experiences back in Turkey,” says Ece Omayma Yigit. “It’s like a communal alarm, that gives us a magical sense of togetherness, knowing that all our neighbours in the community are partaking in the same religious customs as we are.” To keep the tradition alive, the Turkish government has also implemented a membership card for drummers to instil a sense of tradition in those who play and encourage the younger generation to take part.

Cleanliness is an indispensable fundamental of faith in Islam, both physically and spiritually. We cleanse our minds and bodies before and during prayer five times a day, and many Muslims around the world take this purification further when practising special occasions. One great example is the people of Indonesia at the beginning of Ramadan. Padusan (meaning ‘to bathe’ in Javanese dialect) is a deeply embedded purifying tradition in which Indonesian Muslims cleanse themselves just before the Holy Month of Ramadan begins. This ritual is intended to purify the body and soul before starting the fast.

Traditionally Indonesian Muslims gather at springs, natural pools, and lakes. Several groups in central and east Java soak their bodies from head to toe, releasing all dirt and toxins to the earth. The act of pandusan is a combination of tradition and culture, blended to create lasting customs. Springs already hold a profound divine connotation in Javanese culture and, thus, are an integral part of ablution for the Holy Month. The act is said to have come about by a practice spread by the Wali Songo, a group of well-regarded priests who were the first missionaries to transfer Islamic teachings throughout Java. The tradition was always observed one day before Ramadan in the pools at mosques or in the spring wells designated by the palace, but now people may also cleanse themselves in the comfort of their own homes.

The practice of religion in Indonesia is frequently mixed with old traditions, cultivating unique practices and rituals. Such is the pre-Ramadan tradition of nyekar. This word comes from the root word sekar, which means flowers, and the verb nyekar, meaning to spread flower petals (on a burial ground). This is an act of paying respect to departed family members. According to early Javanese beliefs, the month of Ramadan marks the start of a new life cycle and the completion of the previous one.

Therefore, you must pay your respects to the lives that are no longer with us. People get together to pray at, clean and visit graves, usually a week before Ramadan begins. It is customary to decorate the graves with pleasant smelling flowers and is deemed disrespectful if non-fragrant flowers are used. Although there is no hard rule against them, as we learn from Putri Hapsari. She says: “Some people think non-fragrant ‘wild’ flowers are worthless and using worthless flowers is disrespectful to the dead. However, for those who cannot afford anything else, wildflowers are better than none.” This small tradition is just another way families gather to pay tribute to their loved ones once a year, it’s a moment of joy when they come together to talk about the departed and offer stories of their lives. These, and other Ramadan traditions, serve to help Muslims create a sense of community wherever they find themselves throughout the world.

THE RITZ-CARLTON, BAHRAIN INVITES GUESTS TO CELEBRATE THE SPIRIT OF RAMADAN WITH UNFORGETTABLE FAMILY EXPERIENCES.

EVERY PICTURE TELLS A STORY 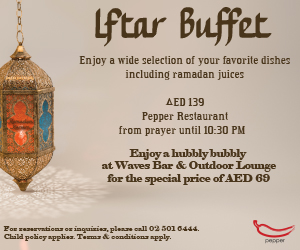