Your Four Seasons bio says: “All my culinary knowledge came by way of on-the-job learning through staging, which means working unpaid for knowledge. I like to tell people that I went from high school right to the pros.” How did you actually get started, did you literally work for free?

Well, my first serious kitchen job was with Wolfgang Puck (WP) Fine Dining Group at Wolfgang Puck American Grille under Chef Aram Mardigian. I was hired as a demi chef de partie in 2007. At that time, I definitely wanted to attend a culinary school, but I simply didn’t have any money for tuition. So, I started coming to work four or five hours early for my shift (this is what Chef Aram had done when he was early in his career). I did this so I could spend time with the butcher and learn from him. After that, I moved on to our baker, and so on.

I then spent time in other kitchens on my off time. I would reach out to prominent chefs and volunteer my time in trade for the opportunity to learn. I staged in the kitchens of James Beard winner Jeff Michaud at Osteria, worked with Chef Robert Rottenstiener, and spent time with Susanna Foo, among many others. I think I went about 18 months without taking a day off! This mentality extended into my vacations. The Corporate Executive Chef of WP Fine Dining Group at the time, Chef Lee Hefter, organised for me to spend my holidays learning in our Los Angeles Kitchens, such as the Michelin-starred CUT and Spago in Beverly Hills, and others. This experience ingrained in me the kitchen culture of Wolfgang Puck.

How did you become involved with the Wolfgang Puck operation?

I was living in Northern Virginia in early 2007, working as a banquet chef in a country club but I had decided to take my culinary career seriously. Just one year prior, Wolfgang Puck (the most recognisable name in American cooking) had opened his first East Coast restaurant in the Borgata Hotel, Casino & Spa in Atlantic City, NJ. I reached out to the executive chef and we met to discuss a seasonal opportunity. I vividly remember Chef Aram (who became my primary mentor in my career) casually mentioning that the restaurant would serve 900 à la carte dinners on a busy night. That statistic shocked and frightened me, but I was excited to learn how to operate at a high standard under those demands. I was hired just for a seasonal summer position. However, Chef Aram said he recognised a certain level of potential within me and pulled some strings to secure me permanent employment at the restaurant. I have been with WP ever since.

How did you find coming to Bahrain and what are your favourite things about the island?

When I first arrived on the Island, I really felt instantly welcomed. Constantly, I am being asked by locals “How do you find Bahrain?”. In the States, we never ask expats if they are happy in the US, because we are rude. But that is a great example of Bahrain’s hospitality. People are just so friendly here.

And that would be the one thing I would highlight as my favourite facet of living here: the people. I am constantly being invited by guests at the restaurant into their homes for lunch. This never happened to me once in the US. But it is just that island mentality. Everyone is super friendly, very welcoming, and very laid back. Even Wolfgang mentioned to me, on his most recent visit, that Bahrain is special because of the people.

Please tell us about your signature dish and why it is special to you.

Well, most people would think I would talk about the cheesesteak when I am asked about a signature dish. But, for me, that designation goes to our Korean Fried Chicken. We originally developed the dish to sell in the hotel rooms aiming to compete with the delivery options. Chef Josh Wetshtein and I made over 40 iterations of the batter before we were satisfied. We eventually found that to achieve the best results, we needed to toast and grind our own rice flour. We ate so much fried chicken during the development process that I didn’t eat it again for six months. And I love fried chicken!

Unfortunately, the dish didn’t take off as we expected. It wasn’t until the restaurants were shut in the pandemic that it really got the recognition it deserved. We were looking for items that represented us well under delivery and takeaway conditions, the Korean Fried Chicken fit perfectly. And boom, it had everybody talking once they tried it. Now it’s available on the CUT lounge menu at all times. It has become one of the dishes I need to keep around, otherwise I think I might lose my visa! ✤

STRAIGHT OUT OF A FAIRY TALE

FROM FINANCE TO FINE ART 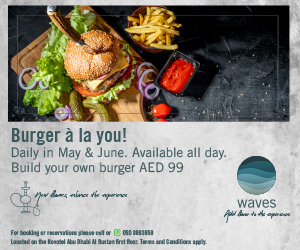